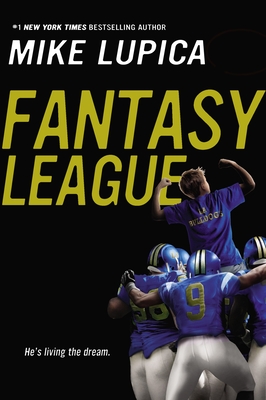 12-year-old Charlie is a fantasy football guru. He may be just a bench warmer for his school's football team, but when it comes to knowing and loving the game, he's first-string. He even becomes a celebrity when his podcast gets noticed by a sports radio host, who plays Charlie's fantasy picks for all of Los Angeles to hear. Soon Charlie befriends the elderly owner of the L.A. Bulldogs -- a fictional NFL team -- and convinces him to take a chance on an aging quarterback. After that, watch out . . . it's press conferences and national fame as Charlie becomes a media curiosity and source of conflict for the Bulldogs general manager, whose job Charlie seems to have taken. It's all a bit much for a kid just trying to stay on top of his grades and maintain his friendship with his verbal sparring partner, Anna.

Like the best Disney film in book form, like Moneyball for kids, Fantasy League is every football kid's dream scenario.

Mike Lupica is the #1 bestselling author of many popular books for young readers, including QB 1, Heat, Travel Team, Million-Dollar Throw, and The Underdogs. He has carved out a niche as the sporting world’s finest storyteller. Mike lives in Connecticut with his wife and their four children. When not writing novels, Mike Lupica writes for New York's Daily News, appears on ESPN's The Sports Reporters and hosts The Mike Lupica Show on ESPN Radio. You can visit Mike Lupica at mikelupicabooks.com

"This will be devoured by young football fans, who appreciate intricate game details and won’t mind a touch of heartwarming sentiment."–School Library Journal