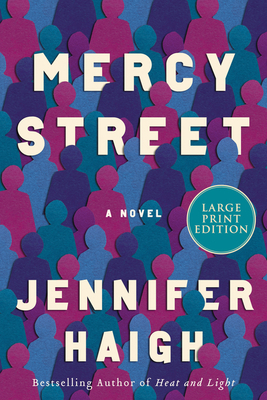 Mercy Street explores the hot-button issue of safe, legal abortion through the eyes of a reproductive health counselor who must cross a line of angry protestors to go to work every day. The novel then pivots and examines the backstory behind pro-life activists. In moving, straight-forward prose, Haigh examines people’s different levels of “choice,” and addresses issues of class, diversity, and loneliness.

“Ms. Haigh is an expertly nuanced storyteller long overdue for major attention. Her work is gripping, real, and totally immersive, akin to that of writers as different as Richard Price, Richard Ford, and Richard Russo.”—Janet Maslin, New York Times

For almost a decade, Claudia has counseled patients at Mercy Street, a clinic in the heart of the city. The work is consuming, the unending dramas of women in crisis. For its patients, Mercy Street offers more than health care; for many, it is a second chance.

But outside the clinic, the reality is different. Anonymous threats are frequent. A small, determined group of anti-abortion demonstrators appears each morning at its door. As the protests intensify, fear creeps into Claudia’s days, a humming anxiety she manages with frequent visits to Timmy, an affable pot dealer in the midst of his own existential crisis. At Timmy’s, she encounters a random assortment of customers, including Anthony, a lost soul who spends most of his life online, chatting with the mysterious Excelsior11—the screenname of Victor Prine, an anti-abortion crusader who has set his sights on Mercy Street and is ready to risk it all for his beliefs.

Mercy Street is a novel for right now, a story of the polarized American present. Jennifer Haigh, “an expert natural storyteller with a keen sense of her characters’ humanity” (New York Times), has written a groundbreaking novel, a fearless examination of one of the most divisive issues of our time.

JENNIFER HAIGH is the author of the short-story collection News from Heaven and six bestselling and critically acclaimed novels, including Mrs. Kimble, Faith and Heat and Light, which was named a Best Book of 2016 by the New York Times, The Washington Post, the Wall Street Journal and NPR. Her books have won the PEN/Hemingway Award, the Massachusetts Book Award and the PEN New England Award in Fiction, and have been translated widely. She lives in New England.

"Extraordinary . . . Wonderfully entertaining, boasting a large, varied cast of vividly drawn characters whose company readers will find deeply rewarding, in no small part because lurking in their shadows is the devastatingly wry humor of their creator. . . . [Haigh is] paying close attention to their choices, large and small. That’s not artifice, it’s art. And I was gobsmacked." — Richard Russo, New York Times Book Review (Editors’ Choice)

“[Haigh is] a superb unsung novelist hovering just under the radar. . . Abortion, guns, vigilantism, drug dealing, white supremacy, bitter misogyny and online fetishism all figure in the tableau Haigh expertly details. . . . Her books might feel traditional if she relied on simple structure, but she likes Altmanesque ways of weaving characters together. . . . She’s largely not interested in destruction here: These people have seen enough of it already. She’s interested in what makes them human.” — Janet Maslin, New York Times

“Haigh deftly walks across the fault line of one of the most divisive issues of our age, peeling back ideology and revealing what all ideology refuses to recognize: an individual’s humanity. . . . Mercy Street argues, both in form and content, that compassion is a powerful counterpoint to the conflict-driven stories that dominate our news cycles, our news feeds and our Netflix queues. In Haigh’s world, in other words, mercy may no longer be fashionable, but it sure is necessary.” — San Francisco Chronicle

“Perceptive. . . . In Haigh’s expert hands, [Mercy Street] explores how we arrive at the beliefs we hold.” — Real Simple

“Haigh (Baker Towers), an award-winning, New York Times best-selling author, holds her readers captive from first to last page with an unflinching look at the human tragedies that lie behind every layer of the never-ending controversial national abortion battle. Her piercing character portrayals and eavesdrop-quality dialogue will have readers asking for her previous works.” — Library Journal

“Haigh has been a brilliant witness to the struggles of ordinary people.” — Ron Charles, Washington Post

“Mercy Street is propulsive, urgent, and essential. Haigh writes with uncommon insight and compassion (and, yes, mercy) about people whose ideals are so strikingly at odds that we can only wait for their lives to collide. I was riveted and transported, and want to hand this book to everyone I know." — Rebecca Makkai, Pulitzer Prize finalist for The Great Believers

"Mercy Street is a bold, important, beautifully written and incredibly timely novel." — Vendela Vida, author of We Run the Tides

“Mercy Street is a savvy, keen-eyed, witty, wise, and altogether luminous novel. A triumph. Jennifer Haigh is a young master of this form. Though, at day’s end, I’d read her just to read her.”
— Richard Ford

“I'm just going to say it: Jennifer Haigh is the greatest novelist of our generation. And Mercy Street is her best novel yet.” — Joanna Rakoff, author of My Salinger Year

"Mercy Street is a strong and heartfelt story about contemporary America in all its complexities, an important and necessary book."
— Dorthe Nors, author of Mirror, Shoulder, Signal