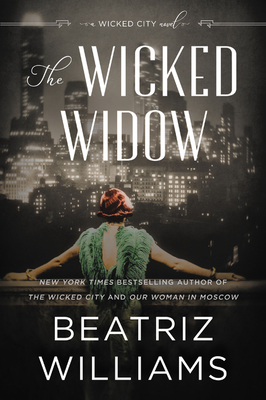 This is book number 3 in the The Wicked City series series.

Gin Kelly, the wicked redhead, is back! Readers will delight in next installment of the Wicked City series by New York Times bestselling author Beatriz Williams.

June 1925. Audacious Appalachian flapper Geneva “Gin” Kelly prepares to trade her high-flying ways for respectable marriage to Oliver Anson Marshall, a steadfast Prohibition agent who happens to hail from one of New York’s most distinguished families. But just as wedding bells chime, the head of the notorious East Coast rum-running racket—and Anson’s mortal enemy—turns up murdered at a society funeral, and their short-lived honeymoon bliss goes up in a spectacular blaze that sends Anson back undercover...and into the jaws of a trap from which not even Gin can rescue him. As violence explodes around her, Gin must summon all her considerable moxie to trace the tentacles of this sinister organization back to their shocking source, and face down a legendary American family at a rigged game it has no intention of losing.

June 1998. When Ella Dommerich’s ninetysomething society queen aunt Julie ropes her into digging up dirt on Senator (and Presidential candidate) Franklin Hardcastle in order to settle old family scores, she couldn’t be less enthusiastic. Pregnant Ella’s recently ditched her unfaithful husband and settled into cozy—if complicated—domesticity with her almost-too-good-to-be-true musician boyfriend, Hector. But then the Hardcastle secrets lead to a web of shady dealings Ella’s uncovered in her job as a financial analyst, and the bodies start to tumble out of the venerable woodwork. With the help of her ex-husband and her mysterious connection to a certain redheaded flapper, Ella digs up more than mere dirt…only to discover herself standing alone between a legendarily ruthless family and the prize it’s sought for generations.

What ugly secrets lurk in the opulent enclaves—and bank accounts--of America’s richest families? And can two determined women from two different generations thwart the murderous legacy of the demon liquor?

Beatriz Williams is the bestselling author of thirteen novels, including Her Last Flight, The Summer Wives, and The Golden Hour, as well as All the Ways We Said Goodbye, cowritten with Lauren Willig and Karen White. A native of Seattle, she graduated from Stanford University and earned an MBA in finance from Columbia University. She lives with her husband and four children near the Connecticut shore, where she divides her time between writing and laundry.

“The Golden Houris pure golden delight Beatriz Williams is at the top of her game.”
— Kate Quinn, New York Times bestselling author of The Alice Network

“I think Beatriz Williams is writing the best historical fiction out there. It’s lush with period detail but feels immediate.”
— Elin Hilderbrand

“Williams imagines the adventures of a world-famous aviator, who disappears in 1937 during a solo, around-the-world flight, in this engaging tale of courage, intrigue, and adventure…Williams builds irresistible tension with the alternating timelines as the fate of Irene and Sam unfolds with shrewd twists and turns that build to an unexpected jolt. Williams’s fans will devour this meaty tale."
— Publishers Weekly(starred review) on Her Last Flight

“Beatriz Williams deftly fits together the characters, stories, and themes that the narrative services into a cohesive whole. The pieces all align perfectly, and she has shaped them together brilliantly. Her Last Flight is a gem of a book.”
— New York Journal of Books on Her Last Flight

“Inventive...What if Amelia Earhart had not only survived her last flight, but found true romance.”
— Kirkus Reviews on Her Last Flight