Servants of the Damned: Giant Law Firms, Donald Trump, and the Corruption of Justice (Hardcover) 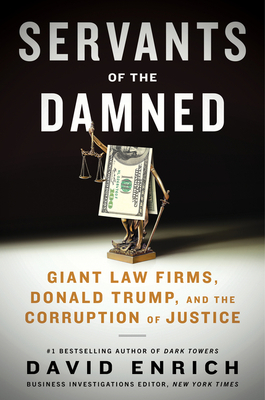 The NYT's Business Investigations Editor reveals the dark side of American law: Delivering a "devastating" (Carol Leonnig) exposé of the astonishing yet shadowy power wielded by the world’s largest law firms, David Enrich traces how one firm shielded opioid makers, gun companies, big tobacco, Russian oligarchs, Fox News, the Catholic Church, and much of the Fortune 500; helped Donald Trump get elected, govern, and evade investigation; masterminded the conservative remaking of the courts . . . and make a killing along the way.

In his acclaimed #1 bestseller Dark Towers, David Enrich presented the never-before-told saga of how Deutsche Bank became the global face of financial recklessness and criminality. Now Enrich turns his eye towards the world of “Big Law” and the nearly unchecked influence these firms wield to shield the wealthy and powerful—and bury their secrets. To tell this story, Enrich focuses on Jones Day, one of the world’s largest law firms. Jones Day’s narrative arc—founded in Cleveland in 1893, it became the first law firm to expand nationally and is now a global juggernaut with deep ties to corporate interests and conservative politics—is a powerful encapsulation of the changes that have swept the legal industry in recent decades.

Since 2016, Jones Day has been in the spotlight for representing Donald Trump and his campaigns (and now his PACs)—and for the fleet of Jones Day attorneys who joined his administration, including White House Counsel Don McGahn. Jones Day helped Trump fend off the Mueller investigation and challenged Obamacare. Its once and future lawyers defended Trump’s Muslim ban and border policies and handled his judicial nominations. Jones Day even laid some of the legal groundwork for Trump to challenge the legitimacy of the 2020 election.

But the Trump work is but one chapter in the firm’s checkered history. Jones Day, like many of its peers, have become highly effective enablers of the business world’s worst misbehavior. The firm has for decades represented Big Tobacco in its fight to avoid liability for its products. Jones Day worked tirelessly for the Catholic Church as it tried to minimize its sexual-abuse scandals. And for Purdue Pharma, the maker of OxyContin, as it sought to protect its right to make and market its dangerously addictive drug. And for Fox News as it waged war against employees who were the victims of sexual harassment and retaliation. And for Russian oligarchs as their companies sought to expand internationally.

In this gripping and revealing new work of narrative nonfiction, Enrich makes the compelling central argument that law firms like Jones Day play a crucial yet largely hidden role in enabling and protecting powerful bad actors in our society, housing their darkest secrets, and earning billions in revenue for themselves.

David Enrich is the Business Investigations Editor at the New York Times and the #1 bestselling author of Dark Towers. He previously was an editor and reporter at the Wall Street Journal. He has won numerous journalism awards, including the 2016 Gerald Loeb Award for feature writing. His first book, The Spider Network: How a Math Genius and Gang of Scheming Bankers Pulled Off One of the Greatest Scams in History, was short-listed for the Financial Times Business Book of the Year award. Enrich grew up in Lexington, Massachusetts, and graduated from Claremont McKenna Collee in California. He currently lives in New York with his wife and two sons.

"Servants of the Damned is a feat of thoughtful, detailed research, rendering with clarity and even compassion the moral drift of 'big law.' As an attorney, I found it illuminating—but this is important reading for anyone concerned about law and policy." — Ronan Farrow, Pulitzer Prize-winning author of Catch and Kill

"This fascinating book is somehow both devastating and rollicking all at the same time. Enrich brings us into the room to watch how a modest law firm built on honorable service gradually becomes an uber-shield for the worst of American greed and abuse – all in the quest for enormous billable profits and outsized power. From handling a fatal gas explosion to terrorizing a tobacco whistleblower to aiding Donald Trump, it's all in here." — Carol Leonnig, Pulitzer Prize-winning co-author of A Very Stable Genius and author of Zero Fail

“A vivid, crackling account of the law at its most bullying. Readers will be outraged.” — Publishers Weekly

"A withering study of how big law got into bed with the 45th president. ... Informative and disturbing." — The Guardian

"Enrich’s stories provide a disturbing window into how the rules underpinning democracy have been weaponised by those meant to protect it." — New Statesman

“A deep dive into the law firm that became one of the key institutions in the president’s orbit. … Jones Day lawyers figured prominently in Trump’s rise to power and his exercise of it. Enrich treats the relationship as a sign of a broader decline in ethical standards at big American law firms.” — Financial Times

"Enrich tells an important story of the gradual corruption of the rule of law, and of the broader corruption of our society." — American Prospect