On Quality: An Inquiry into Excellence: Unpublished and Selected Writings (Paperback) 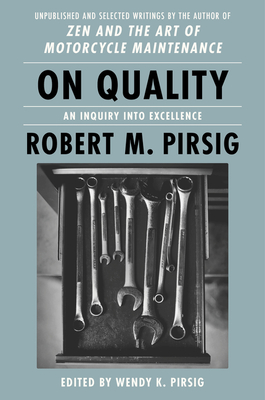 Featuring long-awaited selections from Robert M. Pirsig's unpublished writings, from before and after Zen and the Art of Motorcycle Maintenance, an original collection illuminating the central theme of Pirsig's thought: “Quality”

“The ultimate goal in the pursuit of excellence is enlightenment." —Robert M. Pirsig, 1962

More than a decade before the release of the book that would make him famous, Robert M. Pirsig had already caught hold of the central theme that would animate Zen and the Art of Motorcycle Maintenance: “Quality,” a concept loosely likened to “excellence,” “rightness,” or “fitness” that Pirsig saw as kindred to the Buddhist ideas of “dharma” or the “Tao.” As he later wrote in Zen, “Quality is the Buddha.”

Though he was revered by fans who considered him a guru, the famously private Pirsig published only two books and consented to few interviews and almost no public appearances in later decades. Yet he wrote and thought almost continually, refining his “Metaphysics of Quality” until his death in 2017.

Now, for the first time, readers will be granted access to five decades of Pirsig’s personal writings in this posthumous collection that illuminates the evolution of his thinking to an unprecedented degree. Skillfully edited and introduced by Wendy K. Pirsig, Robert’s wife of four decades, the collection includes previously unpublished texts, speeches, letters, interviews, and private notes, as well as key excerpts from Zen and the Art of the Motorcycle Maintenance and his second book, Lila.

Since its publication in 1974, Zen and the Art of Motorcycle Maintenance has established itself as a modern classic of popular philosophy; selling millions of copies and inspiring a generation, while serving as a perennial touchstone for the generations that follow. On Quality is a remarkable contribution to our understanding of one of the most influential thinkers and writers of our time.

Robert M. Pirsig (1928–2017) is the author of Zen and the Art of Motorcycle Maintenance, which has sold more than five-million copies since its publication in 1974, and Lila, a finalist for the 1992 Pulitzer Prize for Fiction. He graduated from the University of Minnesota (B.A., 1950; M.A., 1958) and also attended Benares Hindu University in India, where he studied Eastern philosophy, and the University of Chicago, where he pursued a PhD in philosophy. Pirsig’s motorcycle resides in the Smithsonian Institution.

Wendy K. Pirsig is an archivist who lives in New England. She was married to Robert M. Pirsig from 1978 until his passing.

"On Quality, a collection of Pirsig’s speeches, fiction, letters, and musings ... reads like a notebook from a life spent pondering: What does 'quality' mean? Why are some things better than others? What is it about humans that causes us to recognize the difference?" — The New Yorker