Need to Know: World War II and the Rise of American Intelligence (Hardcover) 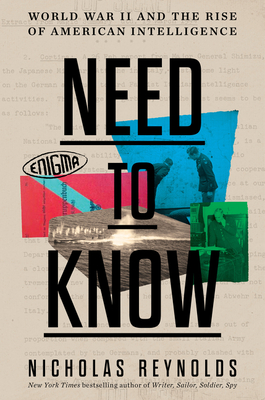 “Need to Know is the most thorough and detailed history available on the origins of U.S. intelligence.” —Michael Morell, former Deputy Director and Acting Director, CIA

Historian and former CIA officer Nicholas Reynolds, the New York Times bestselling author of Writer, Sailor, Soldier, Spy, uncovers the definitive history of American intelligence during World War II, illuminating its key role in securing victory and its astonishing growth from practically nothing at the start of the war.

The entire vast, modern American intelligence system—the amalgam of three-letter spy services of many stripes—can be traced back to the dire straits the world faced at the dawn of World War II. Prior to 1940, the United States had no organization to recruit spies and steal secrets or launch covert campaigns against enemies overseas and just a few codebreakers, isolated in windowless vaults. It was only through Winston Churchill’s determination to mobilize the US in the fight against Hitler that the first American spy service was born, built from scratch against the background of the Second World War.

In Need to Know, Nicholas Reynolds explores the birth, infancy, and adolescence of modern American intelligence. In this first-ever look across the entirety of the war effort, Reynolds combines little-known history and gripping spy stories to analyze the origins of American codebreakers and spies as well as their contributions to Allied victory, revealing how they laid the foundation for the Cold War—and beyond.

Nicholas Reynolds has worked in the fields of modern military history and intelligence off and on for forty years, with some unusual detours. Freshly minted PhD from Oxford University in hand, he joined the United States Marine Corps in the 1970s, serving as an infantry officer and then as a historian. As a colonel in the reserves, he eventually became officer in charge of field history, deploying historians around the world to capture history as it was being made. When not on duty with the USMC, he served as a CIA officer at home and abroad, immersing himself in the very human business of espionage. Most recently, he was the historian for the CIA Museum, responsible for developing its strategic plan and helping to turn remarkable artifacts into compelling stories. He currently teaches as an adjunct professor for Johns Hopkins University and, with his wife, Becky, cares for rescue pugs.

“Of several recent books that coincide with the seventy-fifth anniversary of the [CIA’s] founding. … Reynolds’s book is the best of the recent batch, and the most readable.” — The New Yorker, Best Books of 2022

“Need to Know is the most thorough and detailed history available on the origins of U.S. intelligence. I expect it to become part of the required reading for university classes on intelligence for some time to come. Kudos to Nick Reynolds for giving us Need to Know.” — Michael Morell, Former Deputy Director and Acting Director, CIA

"Need to Know is a detailed history of the origins of American intelligence capability. ... Reynolds traces how the intelligence establishment we know today was built 'from scratch starting during the run-up to the Second World War. The storyline is supported by extensive research." — Foreign Service Journal

"An exhaustively researched critical history of American military intelligence from 1940 to the beginning of the Cold War. ... Reynolds’s scrupulous and well-rounded approach reveals the good, the bad, and the reckless in the early days of U.S. intelligence. Espionage buffs will be fascinated." — Publishers Weekly

"Reynolds masterfully synthesizes the contributions of a number of consequential figures to the burgeoning intelligence industry that WWII bequeathed to modern America." — Booklist

"Based on extensive primary research, this striking and compelling account should be read by anybody interested in the development of U.S. intelligence agencies and special operations during World War II." — Library Journal

“Need to Know is imaginative, bold in framework, and extremely well-executed.” — Richard B. Frank, author of Tower of Skulls: A History of the Asia-Pacific War, July 1937- May 1942

"A readable, thoughtful book on an important subject. ... This is an exceptionally well cited book. ... Need to Know belongs in the required or at least highly recommended readings portions of syllabi in intelligence studies programs." — William Nolte, The Cipher Brief (rated 4 out of 4 "trench coats")

"A revelatory account of the covert efforts of the Allied forces to turn the tide of World War II. ... A thrilling account." — Seattle Book Review

"Reynolds examines the genesis of the Central Intelligence Agency in the inter war years and particularly in the Second World War. He has used his academic research and practical expertise in the intelligence services to examine the complex set of personalities, rivalries and political manoeuvring which led to the development of the CIA and its global reach and influence." — British Modern Military History Society