Great Escapes #5: Terror in the Tower of London (Paperback) 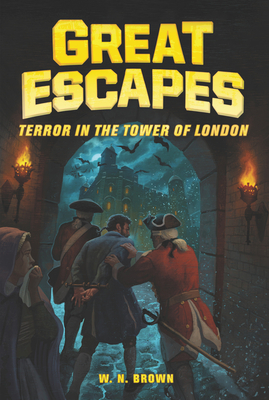 This is book number 5 in the Great Escapes series.

Are you ready for some of the most exciting, death-defying escape stories ever told? The fifth installment in the Great Escapes series has arrived—perfect for fans of the I Survived series!

London, 1716. Lord William Nithsdale has been found guilty of treason after fighting alongside the other rebels against the British crown. For his crime, he is sent to the infamous Tower of London, where he awaits his punishment: the executioner’s blade.

Upon learning of the Lord’s death sentence, his wife, Lady Winifred Maxwell, sets out to free him from the “Bloody Tower.” She plots and plans to pull off a daring and dangerous breakout. If her idea works, Lord Nithsdale might just escape his deadly fate. If it doesn’t, both their heads will roll!

From reluctant reader to total bookworm, each book in this page-turning series—featuring fascinating bonus content and captivating illustrations—will leave you excited for the next adventure!

W. N. Brown is a freelance writer who has written for Time-Life Books’ Mysteries of the Unknown and Mysteries of the Criminal Mind and written articles on historical artifacts, scientific discoveries, and popular culture. Originally from Texas, he currently lives in New York City.

James Bernardin is a versatile and prolific illustrator of many acclaimed books for children. He has illustrated Laura Numeroff's Would I Trade My Parents?, Eve Bunting's Too Many Monsters, and Candy Chand's The Twelve Prayers of Christmas. He has also created artwork for numerous book covers, including Mary Pope Osborne's Tales from the Odyssey series.

James lives on Bainbridge Island in Washington State with his wife, Lisa, and two sons, Wyeth and Bryson.

Michael Burgan has written more than 250 books for children and young adults. His specialty is history, with an emphasis on biography. A graduate of the University of Connecticut with a degree in history, Burgan is also a produced playwright and the editor of The Biographer’s Craft, the newsletter for Biographers International Organization. He first started writing for children as an editor at Weekly Reader before beginning his freelance career in 1994. He lives in Santa Fe, New Mexico.