The Art of Resistance: My Four Years in the French Underground: A Memoir (Paperback) 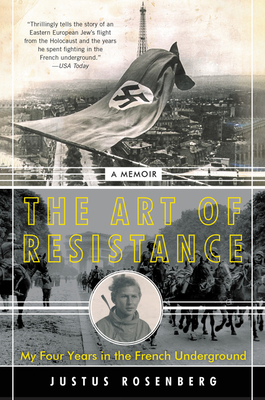 "Thrillingly tells the story of an Eastern European Jew’s flight from the Holocaust and the years he spent fighting in the French underground.” —USA Today

The Art of Resistance is unlike any World War II memoir before it. Its author, Justus Rosenberg, has spent the past seventy years teaching the classics of literature to American college students. Hidden within him, however, was a remarkable true story of wartime courage and romance worthy of a great novel. Here is Professor Rosenberg’s elegant and gripping chronicle of his youth in Nazi-occupied Europe, when he risked everything to stand against evil.

In 1937, after witnessing a violent Nazi mob in his hometown of Danzig, a majority German city on the Baltic Sea, sixteen-year-old Justus Rosenberg was sent by his Jewish parents to Paris to finish his education in safety. Three years later, the Nazis came again, as France fell to the Germans. Alone and in danger, Justus fled Paris, heading south. A chance meeting led him to Varian Fry, an American journalist in Marseille who led a clandestine network helping thousands of men and women—including many legendary artists and intellectuals, among them Hannah Arendt, Marc Chagall, Andre Breton, and Max Ernst—escape the Nazis. With his intimate understanding of French and German culture, and fluency in several languages, including English, Justus became an invaluable member of Fry’s operation as a spy and scout.

After the Vichy government expelled Fry from France, Justus worked in Grenoble, recruiting young men and women for the Underground Army. For the next four years, he would be an essential component of the Resistance, relying on his wits and skills to survive several close calls with death. Once, he found himself in a Nazi internment camp, with his next stop Auschwitz—and yet Justus found an ingenious way to escape. He two years during the war gathering intelligence, surveying German installations and troop movements on the Mediterranean. Then, after the allied invasion at Normandy in 1944, Justus became a guerrilla fighter, participating in and leading commando raids to disrupt the German retreat across France.

At the end of the Second World War, Justus emigrated to America, and built a new life. For the past fifty years, he has taught literature at Bard College, shaping the inner lives of generations of students. Now he adds his own story to the library of great coming-of-age memoirs: The Art of Resistance is a powerful saga of bravery and defiance, a true-life spy thriller touched throughout by a professor’s wisdom.

JUSTUS ROSENBERG (1921-2021) was born in Danzig (present-day Gdansk, Poland), in 1921. Graduating from the Sorbonne, in Paris, he worked with the French underground for four years and then served in the United States Army. For his wartime service, Rosenberg received a Bronze Star and a Purple Heart. For seventy years, he taught at American universities; most recently as professor emeritus of languages and literature at Bard College, where he was on faculty for fifty years. He is the cofounder of the Justus & Karin Rosenberg Foundation, which works to combat anti-Semitism. In 2017 the French ambassador to the United States personally made Rosenberg a Commandeur in the Légion d’Honneur, among France’s highest decorations, for his heroism during World War II.

“Thrillingly tells the story of an Eastern European Jew’s flight from the Holocaust and the years he spent fighting in the French underground.” — USA Today

"The very existence of The Art of Resistance is its most remarkable feature. But the story, too, is a good one, recounted with astonishing lucidity. It’s a picaresque tale of a teenager who survives assorted perils by dint of luck, courage and his intellectual gifts, encountering various famous people along the way." — Forward

"Rosenberg is a natural raconteur, with a pleasing conversational style. ... What shines through his engaging book is his evident desire to be helpful and responsible and his acute consciousness of how extraordinarily lucky he was." — The Times (London)

“Rosenberg, professor emeritus of literature at Bard College, recounts his remarkable journey from young Polish-Jewish student to daring French underground freedom fighter in this powerful debut memoir. … Rosenberg, a modest narrator, nevertheless writes thrillingly of his life—of participating in reconnaissance and guerrilla attacks; joining the 636th Tank Destroyer Battalion as interpreter and scout; and serving as supply officer for the United Nations Relief and Rehabilitation Administration—all while dodging injury, imprisonment, and death. Rosenberg’s memoir has all the suspense of a tense spy thriller.” — Publishers Weekly