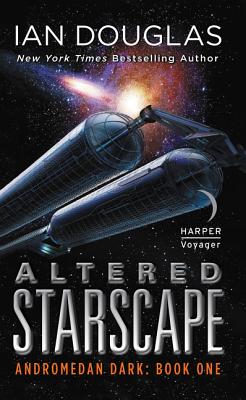 This is book number 1 in the Andromedan Dark series.

Galaxies collide in a thrilling new series from bestselling author Ian Douglas, as the last humans in the universe face off against a new threat

2162. Thirty-eight years after first contact, Lord Commander Grayson St. Clair leads the Tellus Ad Astra on an unprecedented expedition to the Galactic Core, carrying more than a million scientists, diplomats, soldiers, and AIs. Despite his reservations about their alien hosts, St. Clair is deeply committed to his people—especially after they're sucked into a black hole and spat out four billion years in the future.

Civilizations have risen and fallen. The Andromeda Galaxy is drifting into the Milky Way. And Earth is most certainly a distant memory. All that matters now is survival. But as the ship's Marines search for allies amid ancient ruins and strange new planetary structures, St. Clair must wrap his mind around an enemy capable of harnessing a weapon of incomprehensible power: space itself.

Ian Douglas is one of the many pseudonyms for writer William H. Keith, the New York Times bestselling author of the popular military science fiction series The Heritage Trilogy, The Legacy Trilogy, The Inheritance Trilogy, The Star Corpsman series, The Andromedan Dark series, and The Star Carrier series. A former naval corpsman, he lives in Pennsylvania.