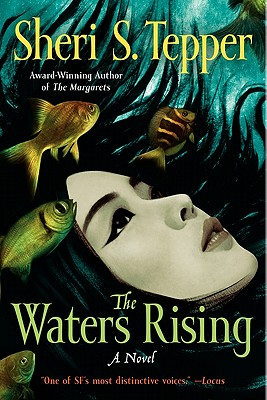 Her first new novel since The Margarets, The Waters Rising marks the glorious return of the extraordinary Sheri S. Tepper, the award-winning contemporary master whom Locus has called, “one of sf’s most distinctive voices.” The Waters Rising tells a gripping story of a future already ravaged and now in even graver peril when a dreadful, awesome killing power is resurrected from the past. Readers of Margaret Atwood and Marge Piercy will join with fans of literary sf in praising this stunning masterwork of speculative fiction from one of the acknowledged greats.

Sheri S. Tepper is the author of more than thirty resoundingly acclaimed novels, including The Waters Rising, The Margarets, The Companions, The Visitor, The Fresco, Singer from the Sea, Six Moon Dance, The Family Tree, Gibbon's Decline and Fall, Shadow's End, A Plague of Angels, Sideshow, and Beauty; numerous novellas; stories; poems; and essays. She lives in Santa Fe, New Mexico.

“Tepper balances pointed criticisms of our era with a calamity that appears to owe far more to Genesis than to science...the writing is slick and crafeully crafted, Xulai has plenty of pluck, and her companions possess a nearly ideal mixture of virtues, flaws, and enthusiasm for redemptive sacrifice.” — Publishers Weekly

“The Waters Rising” delivers a strong, complex story that poses tough questions and demands a new look at the possibilities of the future.” — Wichita Eagle

“Tepper holds up a funhouse glass to customs and mores many of us take for granted. . . . She provides a good story, with sympathetic characters and plenty to think about.” — Denver Post

“This lyrical, beautifully written novel transcends the sum of its parts to become a parable of survival and hope in hopeless times.” — The Guardian

“Tepper has developed a dependable following with works that have an epic fantasy feel but that ultimately reveal logically consistent scientific trappings. This work is no exception, a successful blend of dying-earth fantasy and wicked-witch fable.” — Booklist