How to Paint a Dead Man: A Novel (Paperback) 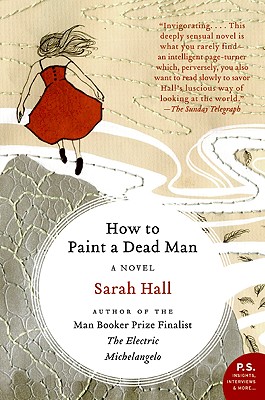 From Sarah Hall, the acclaimed, award-winning author of Daughters of the North and The Electric Michelangelo comes the Harper Perennial paperback original novel How to Paint a Dead Man, a daringly imaginative tale in which multiple lives are woven together through the prism of a still life painting. Moving from Italy to England, spanning nearly half a century, and bringing together the lives of four disparate characters, How to Paint a Dead Man is Hall’s fierce and brilliant study of art and its place in our lives.

Sarah Hall was born in 1974 in Cumbria, England. She received a master of letters in creative writing from Scotland's St. Andrews University and has published four novels. Haweswater won the Commonwealth Writers' Prize (overall winner, Best First Novel) and a Society of Authors Betty Trask Award. The Electric Michelangelo was shortlisted for the Man Booker Prize, the Commonwealth Writers' Prize (Eurasia Region), and the Prix Femina Étranger, and was longlisted for the Orange Prize for Fiction. Daughters of the North won the 2006/07 John Llewellyn Rhys Prize and the James Tiptree Jr. Award, and was shortlisted for the Arthur C. Clarke Award for science fiction. How to Paint a Dead Man was longlisted for the Man Booker Prize and won the Portico Prize for Fiction. In 2013 Hall was named one of Granta's Best Young British Novelists, a prize awarded every ten years, and she won the BBC National Short Story Award and the E. M. Forster Award from the American Academy of Arts and Letters.

“Sarah Hall is a huge talent. Her third novel, How To Paint A Dead Man, is a beautiful, powerful book of love, lust, death, passion, art, desperation and loss. She writes her characters brilliantly.”
— Bookseller (London), “Bookseller's Choice, June 2009”

“Invigorating….her verbal depiction of fictional art never stales…This deeply sensual novel is what you rarely find - an intelligent page-turner which, perversely, you also want to read slowly to savour Hall’s luscious way of looking at the world.”
— The Sunday Telegraph

“Her latest novel, even more than ever, reads as though it was an absolute thrill to write....a maddeningly enticing read...an amazing feat of literary engineering.”
— The Independent on Sunday "New Review"

“Daring...Along with contemporaries like Scarlett Thomas and Lydia Millet, Hall is staking new ground for women in the “novel of ideas” category. Full of haunting images and thought-provoking ideas, How to Paint a Dead Man will linger in the mind.”
— BookPage

“In this gorgeous still life of a book, Sarah Hall gives us four lives…each narrated in a different voice…Hall has a poet’s gift, and this novel is best enjoyed as a prose poem whose blindingly beautiful insights gradually accrue…She has made visible to us…the ever-present shadow of eternity.”
— Washington Post Book World